Patients scrambling for medicines, doctors unable to work due to blackout and hospitals running out of resources.

Shafi is tired and has hardly had much sleep, but the 54-year-old is prepared to stay at the Sher-i-Kashmir Institute of Medical Science (SKIMS) hospital for as long as it takes.

Rafi suffers from a chronic kidney ailment and needs dialysis every 15 days, a medical procedure that cannot be done at his village in Tangdar area of Kupwara, a frontier district some 100 kilometres northwest of Srinagar.

Kashmir under lockdown: All the latest updates

Kupwara is close to the Line of Control (LoC), the de facto border that divides the disputed Kashmir territory between India and Pakistan.

The military lockdown and communications blackout imposed by the Indian government following the revocation of the region’s autonomy last month has crippled life in the Muslim-majority Kashmir region.

The unprecedented siege, which entered its second month on Thursday, has severely affected patients in need of urgent medical attention and better facilities.

“We can’t go anywhere for now. My son needs medical care which isn’t available in Tangdar. So we are planning to stay at the hospital until the situation improves,” Shafi told Al Jazeera.

On the nights of August 20 and 21, Shafi took his ailing son to the hospital. He said he was stopped at multiple security checkpoints set up by the Indian security forces along the way.

“We were supposed to get his dialysis done on August 15 itself, but couldn’t do it. Due to the restrictions, everything was shut and we were scared to go out,” said Shafi.

“But when he fell sick, we pleaded with a neighbour who owns a vehicle to bring us here.”

Running out of money for treatment

Shafi said that dialysis for his son costs 2,800 rupees ($25) each time. While the government-run hospital treats patients at a subsidised price, it does not provide the medicine required for this procedure.

Anger and defiance mark one month of Kashmir siege

Patients are supposed to buy the medicine needed for dialysis from outside the hospital. Amid the lockdown, the medicine is not always available at the nearby pharmacies.

A medical staff member at SKIMS hospital, who did not want to be identified, told Al Jazeera that many patients at the hospital have run out of money to buy the critical medicines.

“We don’t provide them any medicines. They have to buy them from retail stores outside the hospital and many of them come from far-flung areas,” he said.

Last week, he said, a patient did not have any money and was helped by other patients and their attendants in the nephrology ward, who put together a contribution. 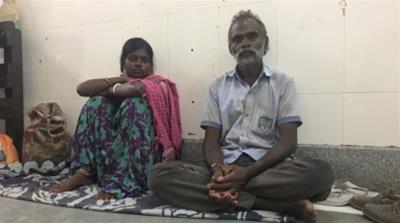 At the Sri Maharaja Hari Singh (SMHS) hospital in Srinagar, Surendar Prasad Goyal and his daughter, Priya, who are from Chhattisgarh state in central India, wait anxiously outside the operation theatre.

Earlier this week, Goyal’s 16-month-old grandson Lucky suffered a serious accident at the brick kiln he and his daughter worked at in Anantnag district of Kashmir.

While doctors carried out surgery on Lucky immediately after he was admitted, he is still not stable.

Goyal said he was able to reach Srinagar by ambulance at the district hospital in Anantnag. While he had the money he needed for the surgery, he is not sure how long will it last.

“We have been out of work for days. Whatever little we had saved has been used to pay for the medicines and other bills,” he told Al Jazeera.

Goyal, who is in his 50s, also said he was not aware of the Indian government’s advisory asking people from outside the Kashmir region to leave when the clampdown started.

He said he had not spoken to his family for the last 30 days and they were not aware of the accident. He said he will leave the Kashmir valley as soon as Lucky is discharged.

Mumtaza Dar from Beeru village in Budgam district was scheduled to undergo surgery at the SMHS hospital on August 10, but she could not make it to the hospital due to the restrictions placed by the Indian authorities.

Forced to delay her medical needs, the chronic piles patient bled for weeks. As her condition at home worsened, her family hired a vehicle to take her to Srinagar last weekend.

“For the first two weeks, we were scared to come to Srinagar. There was no transport available. There were restrictions everywhere and we didn’t know what was going on,” said Mohammad Ashraf Dar, a relative of Mumtaza.

“They should have at least kept the communication lines open. If we run out of money or there is a problem with a patient here, there is no way we can reach out to our family and friends for help,” he said.

A doctor at the SMHS hospital, who did not want to be named, said the inflow of patients had dipped by less than half as people were delaying going to the hospital because of the uncertainty over the lockdown.

“We only provide medicines to the patients, who are in the emergency. Others have to purchase them from medical stores outside the hospital,” he said.

The doctor also told Al Jazeera that at least 60 victims of pellet gun attacks had been treated at his hospital in the last month.

Reporting the Kashmir lockdown: ‘What sort of normalcy is this?’

Looking for the doctors

The communications blackout has forced the doctors to improvise in order to carry on their work.

At Lal Ded, one of the biggest maternity hospitals in Indian-administered Kashmir, a megaphone is mounted at the top of the building to call out for the doctors whenever a patient needs them.

In case they are not able to hear the calls, a staff member at the hospital is asked to go to every ward to look for them.

At the SMHS hospital, ambulance driver Abdul Rashid said he had not visited his home and had been working round-the-clock since the restrictions were imposed on August 5.

Rashid, who has been at the hospital for the last 15 years, said he had not seen such a situation in Kashmir before.

He said he had to go to the Bone and Joint Hospital in Srinagar’s Barzulla area last week to drop a patient. On his way back, he was stopped by the Indian paramilitary troops, who held him for an hour before allowing him to pass.

“They were not sure if I should be allowed to go or not,” he said.

Rashid said his day begins early in the morning, ferrying in doctors to the hospital. He is also responsible for taking patients to other hospitals following a referral.

But the biggest hurdle he said he faces is when he has to fetch a doctor during an emergency.

“Two days ago, an emergency case was brought to the hospital. The specialist doctor had already left for home and I was asked to bring him. It was late at night and I didn’t know his house. So I had to knock on every door in the neighbourhood,” he said.

Rashid said he is worried that one of these days, a patient may lose her life due to the crippling restrictions imposed by the Indian authorities.

“It’s terrible living in these circumstances.”